I am old enough to remember when airline flight attendants were called stewardesses. Maybe there were stewards, as in a male version of stewards. I don’t know. But stewardesses much like flight attendants do now were tasked with taking care of the needs of the passengers flying with them as well as the cabin itself. Stewardesses made sure all was well in any particular flight to a particular destination. They served food, coffee, snacks. They assured lanes were clear and the restrooms clean. They informed folks of safety protocol and calmed nerves amid turbulence. These things and so much more. I’ve known stewardesses, or flight attendants as they are known now, to comfort crying babies in flight in only to give their parents a rest.

I should also note that airliners weren’t the only moving vehicle that employed stewardesses. Ships, cruise ship namely, employ them as well.

Thinking of the work of the stewardess, we come together for Stewardship Sunday. We are called to be stewards and stewardesses of the vehicle called the church.

This analogy is interesting in numerous ways. One particular way I find interesting the we-are-stewards-of-the-church analogy is this:  In history, the metaphor of a boat has often been used to describe the church. In fact, some churches have stained glass windows with boats as representative of the church. The church is to be fishers of men, yes. But we’re also called to be keepers, stewards, of the boat, of the ship called the church.

Being stewards of the church certainly means maintaining the physical structure of the church. We like to be warm during the winter. And having a heating system that functions well and consistently means being good stewards of the church. Rick and Larry can tell you how this is an important yet expensive and time-consuming job.
There is also the worship service and stewarding it. There are bell-ringers, candle lighters, liturgists, greeters, musicians, and an officiant, usually the pastor. All of these are stewards of the church. Then there are refreshment providers and those who lock the church up after everyone has gone.

Yet there is more. All of this takes funds. So many generous spirits give, donating the resources that keep the ship afloat!

All of these roles means being stewards of the church. This morning we honor all our stewards and stewardesses. As we enter this season of thanksgiving, we offer gratitude for all the hearts and hands that serve the community and its movement forward. So, let’s give ourselves a round of applause!

11,000 scientists just this week expressed great distress that if we do nothing as citizens of the earth, the planet we live on will face “untold suffering.” They said the Earth is looking in the face of a climate emergency. Changing how we do things and in a drastic way, it is a necessity if we want to stem the tide of the unfolding emergency.

Now, if this sounds like that old fable with Chicken Little crying the sky is falling, the sky is falling. Or maybe an example of a religious group saying Jesus is returning on this so and so a date. The fact that the sky hasn’t fallen, the fact that Jesus has never returned, has I think influenced us to dismiss the reality that this is different. The sky isn’t falling, but greenhouse gases have created a kind canopy over the earth, warming the earth inside. This is a reality and we need to face it with courage and creativity.

Some 1200 years ago, in the 700’s, in medieval China, a form of Christianity, a Syrian form of the Eastern Orthodox church, developed and became quite popular. While it did not last, being persecuted out of existence in the 1100’s, the Chinese Christian church offered a really unique and fascinating form of the Christian faith. One of its innovative and intriguing approaches was related to its view of how followers of Christ are to live on the Earth. It is an approach I wish the Christian tradition preached from the rafters from then on. It preached that when God created the heavens and the earth, he endeared humanity with the goodness of God and created humans to be guardians of Creation. It preached that we as God’s greatest creation, made in the likeness of God, are to guard the earth against destruction and misuse and degradation. We are called to guard the earth and assure her safety and protection. It’s a message we need to remember and reclaim! Before its too late.

An important part of Christian stewardship is caring for one another. One expression of our care for one another is the practice of prayer. Lifting up those who need God’s presence, peace, and power in prayer as a daily practice – it is a beautiful practice that moves us beyond self and helps us to truly see others and show them God’s compassion.

As we close with a pastoral prayer, I ask you to consider it as a collective act of taking into our hearts and minds all those needing God’s care and healing, including our leaders, our governments, our organizations and groups and churches. And as you take them into your hearts and minds, let us hold them in minds and hearts and in God’s light. The Quaker tradition has a lovely way of putting this. In prayer for a person or situation, we hold him or her or it in the light, namely the light of God. And then we let them go to be held in God’s mind and heart. That’s the practice of prayer, we take into our minds and hearts those we pray for, we hold them in the light of God, and then we let God do the rest.

So, let us offer our pastoral prayer, and we will close with the time with a song, Lord, listen…

O Spirit of Holy Compassion, undergirding this community, how we find strength and common purpose in You and in each other through You. We turn our minds and hearts toward those who need our love and support: those who are ill, those who are in pain, either in body or in spirit, those who are lonely, those who have been wronged, those who grieve. We hold them all in the Light, grateful for the miracle of togetherness and the compassion we are able to share with each other and the world. Amen. 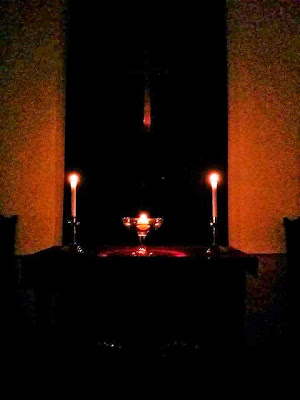 Grief. Even days, months, years after the hurricane that is a loved-one's death first arrives on our shore, grief still brings strong winds across our skies, our fields, our pathways.  If there is Joy, it is somehow mixed with sorrow, with the awareness of loss, with the knowledge that someone whom we shared so many holidays past with, so many special times, so ordinary times with, is now not here. Maybe there is that nagging sense that things are too different now. It brings to mind that Emily Dickson poem, which may describe the feeling: “There's a certain Slant of light, Winter Afternoons – That oppresses, like the Heft Of Cathedral Tunes.” In the wake of losing someone who was always there, our days’ slant of light has changed. The heaviness, the heft aches even amid sunlight.
Time progresses, as time in its nature does. And hopefully, we are able to see a little more easily. We are able to feel the many gifts this human life offers. The gift of fond memories becomes indelible, priceless, powerful.

So in honor of all this, we take time this All Saints Sunday to recall the memory of loved-ones. We offer a space and a moment here and invite you to remember and honor a loved-one that has touched your life and whose memory continues to touch your life by simply quietly reciting their name and a word that represents them. This is a sacred time for you to allow your loved-ones name and a descriptive word to represent all those precious memories and times that you shared with them, those holy moments that live in the sacred spaces of your life.

So let us first experience some moments of silence, then I will begin the reciting of names by offering the name of a loved-one I dearly miss this year.

[Reciting of Names]
We clasp the hands of those that go before us,
And the hands of those who come after us.
We enter the little circle of each other's arms
And the larger circle of loved-ones,
Whose hands are joined in a dance,
And the larger circle of all creatures,
Passing in and out of life,
Who move also in a dance,
To a music so subtle and vast that no ear hears it
Except in fragments
Renewal and Hope

Life, love, and loss are sadly inseparable. To live is to love, and to love is to lose. Such a process is unavoidable. The cost of love is loss. But we must pay the price if we are to live meaningful lives, lives moved by compassion and vulnerability, the priceless gift we give of seeing and feeling of another’s pain.

Amidst it all, amidst the darkness and the loss, there is a light to be found. Fortunately, dawn arrives after a long night. Light always overcomes the dark. A child, even if far away in a distant land, is born amid this bleak winter. Emily Dickinson reminds us of this with a wonderful poem maybe you memorized as a child.

I’ve heard it in the chillest land -
And on the strangest Sea -
Yet - never - in Extremity,
It asked a crumb - of me.

May we realize that, yes, sorrow cannot be denied, but life, life with a capital L, the life of the heavens and the earth, progresses. It moves along in ebbs and flows like the water that begets life. One night ends; a new day begins. Moments of darkness roll into the light of sunshine. As one life passes, a new one begins with a cry, a tears of a newborn and the tears of parents entwine.

The scripture tells us, “and a child shall lead them.” In the new births realized everywhere around us – births of life and of moments – may our memories of our loved-ones move into the surmise that each life and each moment before us is a miracle, containing the hope and renewal once believed gone but now reborn.

So I close with a prayer and let this be our pastoral prayer this morning...

May you each and every day allot for yourself a time of remembrance and a time of hope and renewal. May we see each day that all that we are now is because of all that we learned from and experienced with and in others. May we see that to honor this truth is one of the most important things we can do. May we take some time to breathe, to be still and know the holiness of each and every day. May we breathe in God’s love and breathe out God’s love with the world. May we take-in to our thoughts and prayers those who need God’s presence, peace, and healing and may we reach out to those who need a friend. And let us give God who is Love the thanks for its in Love's name we pray, Amen.
No comments: