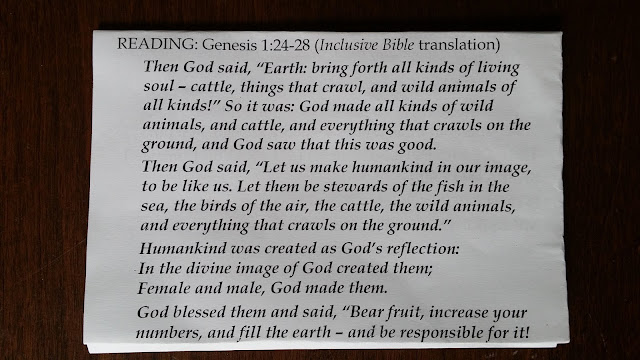 The Hebrew word used here is tselem. Some versions translate tselem as image. Others as likeness or even resemblance. In Genesis 5, the same term is used to describe Adam’s son Seth. Adam had a son in his own likeness, in his own image, the New International Version puts it.

The Eastern Orthodox highlights this doctine known as Imago Dei, in the image of God. The Greek word used for tselem and one the Orthodox tradition makes central to its faith practice is the word "icon." We are created as icons of God. We are a tangible picture that God chose to show what God is like. And if we contemplate this reality deeply enough, God is revealed to us.

This word icon is also associated with Christ. Colossions 1:15 states Christ is the icon of God, the perfect, uncreated icon of God.

The Jewish understanding of the notion we know as Imago Dei makes it even clearer. Here, the literal meaning of the word tselem is shadow. We are created to be God’s shadow. We are literally God’s shadow  here on earth.  As God’s shadow, we are the outline, the representation of God in the world of shapes and form and matter, all of which God isn’t.  God cannot have a shape or a form or have matter. That would make God a thing. The closest we can get to actually seeing God is the shadow we each represent.

There is another important thing to consider when thinking about the idea of being created as the shadow of God is elucidated by the song I learned in grade school – “Me and my shadow, walking down the avenue.”

Then there is that poem by Robert Louis Stevenson that many children once learned memorized in grammar school:

I have a little shadow that goes in and out with me,
And what can be the use of him is more than I can see.

Me and my shadow
Strolling down the avenue.

Or reciting the poem:

I have a little shadow that goes in and out with me,
And what can be the use of him is more than I can see.

The effect of this is what? God is with us in the most intimate and closest of ways. Wherever we are God is with us, yes. God and I stroll along the avenue. God and I go in and out together. Yet there is more. God and I are not only connected in a necessary way, God is the source of my very existence. Just as there can be no shadow without that which is being represented, we cannot be without God. God is the reason for our very existence.

But something happens to that exalted reality, doesn’t it? Just because we are made to be a certain way, doesn’t mean we always follow suit, does it?

Of course, as the story goes, Adam and Eve, created as God’s image, take a wrong turn. This wrong turn complicates things, complicated things in a tremendous way.

I don’t want to look at that story right now, the story of what has been called in the Western Christian tradition, “The Fall.” I will leave that for another sermon. What I do want to look at is the immediate aftermath. What happens to Adam and Eve in the aftermath of that wrong turn? We know what the before looks like – created in God’s image. What does the after look like?

To sum it up, the after for Adam and Eve is this – before, they were naked before God, fully open and seen by God and fine with that.  After, they clothe and cover, hiding themselves from God. Of course, this is metaphorical. The image of God is now cloaked and covered over somehow. Something is blocking the light that caused the shadow and so that shadow is distorted and not clear.

Before, God and Adam and Eve were united, communing together in Eden. After, they are escorted out of Eden. In other words, there is now some distance between God and the human.

Before, human lacked the kind of suffering that got in the way of communing with God. After, suffering is a reality and it effects our connection with God.

All of this is to say, we have a lower-anthropology. The high-anthropology of life in the Garden is marred. And we face the consequence of a life outside that Garden.

We must be clear here, there is disagreement about what the so-called Fall meant. The Jewish tradition don’t see a fall. It sees in Adam and Eve a warning sign. They see in Adam and Eve a fundamental example of what it means to fail living the way God created us to live. Did Adam and Eve drop the ball, and fail to be who they were created to be, yes. A change in who they were as humans, no.

Eastern Orthodox tradition sees the story of Adam and Eve’s wrong turn closer to the Jewish way. Sin is introduced, yes. The idea is akin to smoking your first cigarette. Yes, even that first cigarette effects our lungs. And yes, we are exponentially more likely to smoke a second cigarette if we smoke that first one. Still, the smoking of that second cigarette is not a guarantee or a given. Sin is not inherited, in other words. It just becomes a more tempting option. Nonetheless, imago dei, our creation in God’s image has not disappeared, it is simply hidden by sin.

Western Christianity sees more of a break. Adam’s sin created a chasm that resulted in a degradation of who we were created to be, so much so that all there is depravity in us. The image of God is now distorted, degraded, and the human soul is now depraved as a result of Adam’s wrong turn.

I for one accept the more Jewish-Eastern Orthodox view of things here.

But we also see this tension culturally. On one hand, we have the self-help movement’s view of the human self, which takes a very high and positive view. And on the other hand, we have science-based materialists who see the human as merely a more evolved primate operating on the basis of the human brain, natural selection and surviving as a species.

So who are we? Looking at this tension between a higher view of the human self and the lower view will tell us a lot. History, how we’ve historically viewed the human self, tells us a lot as well. Finally, Scripture, especially the Bible, tells us a lot, most of all, in my opinion.

So for the next couple weeks we are going to delve deep. In the end, hopefully we have a balanced view of who exactly we are.