The Cult of Winning & the Faith of Jesus 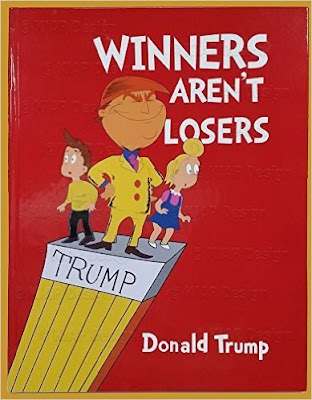 I must begin with an important qualifier. As someone with a Baptist background, the separation of church and state a la that Baptist forefather Roger Williams, is essential to me. Explicitly tying religion and partisan politics together in church is a dangerous game. SO I will explicitly avoid talking about the politician Donald Trump or his politics. In fact, we might refer to the verb "trump," as in "to trump someone," instead of the name Trump, as we think about Trumpism. This makes sense because both the word "trump" and the philosophy of trumpism predate Donald Trump.


Trumpism is more a philosophy of life than it is a political philosophy. Trumpism is a way of being, a way of living in the world.


Some have noted that hardcore supporters of Trump have a cult-like devotion to him. The reason this may be true is that philosophies of life are as close to religion as one can get without it being a religion.

So the philosophy of life called trumpism, which under-girds political views that arise from it -- what is it about? What is trumpism?

The core value, the ultimate concern of trumpism is what? It is winning. Trumpism worships Victory, Winning, being the king of success. From this, trumpism honors the winners, the victorious, those at the top with their trophies.

Remember that game we used to play as kids this time of year. We’d find big hills of plowed snow in parking lots and play king of the mountain. Whoever go to the top first was the king, and the king at the top of the mountain felt, well, kingly – powerful, victorious, invincible. “I am king of the world!” Well, trumpism is a grown-up, real-stakes version of King of the Mountain where the point is to be the king at the top and to have everything associated with you be at the top too.


The worship of winning and the focus on the symbols of winning – wealth, fame, power – is certainly nothing new. It is telling that Trump as a businessman once wrote self-help books, Art of the Deal being the best, or shall we say most known, example. It is not insignificant that the man hocking trumpism often said just below the Bible on the greatest scale was Art of the Deal.

Linked to this focus on self-improvement and self-help is a school of thought called Social Darwinism. Social Darwinism preached that it’s a man eat man world out there, it is a fight for survival, and only the powerful and the successful will survive. Society and culture have their own form of natural selection. They favor those who win and reward them. So empower yourself so you can do battle in the world, a world built on competition and a “to the victor go the spoils” mentality. In this world, a key goal is to Win friends and influence people.

Sadly, segments of the Evangelical church, the megachurch segment especially, has bought – literally – into this philosophy. The prosperity gospel and its sibling, the salvation for self-improvement’s sake gospel, is foundational to most of the megachurches around. They mostly signed-on to Trump, surprise, surprise. He is an example of being prosperous, so - the idea goes - he must be doing something right, he must be blessed by God somehow. If God is a God of winners, then he must be favored by God somehow.

Our society these days eats up the cult of winning. We love our sports, don’t we. We want our sports teams to win it all. What Patriots fan rooted for them to lose the Super Bowl? I think of the Vince Lombardi quote, "if it doesn't matter who wins or loses, then why do they keep score?" Even the Apostle Paul talked about fighting the good fight and winning the race.

Fine and good. Sports are sports. Competition in sports can have its benefits. The problem arises when everything becomes a sport. The problem comes when we mix the fun of sports with the cause of public service. Public service, leadership in the public sphere, should not be about some winning and losing but about the commonwealth, about shared wealth, shared success, shared responsibility, shared community. The service in public service, the serving the need of each other, is essential for any commonwealth to truly be itself.

What about the Progressive church? What about Unitarian-Universalism? What is the gospel we offer? What is our alternative to the Neo-Social-Darwinist gospel?

If we wanted a polar opposite philosophy of life to trumpism, we wouldn’t have to look too long or too far. Despite Evangelical Christianity’s sell-out and buy-in of trumpism’s cult of winning, the very person they supposedly worship provided that polar opposite philosophy of life some 2000 years ago in the face of Empire. If there were ever a thing more anti-trumpist, it would be the teachings and life-lesson of Jesus.

Jesus continually exalted the most vulnerable, the least among us, the losers, the lost, the last-placers, the lesser-thans.

In turn, he sought to unmask humility in the rich, the powerful, and the arrogant. He called on them to let go of their prized-possessions, their pride, their ego, and become poor in spirit, to see our own vulnerabilities, our own ourselves in the poor, and to be servants at heart.

And Jesus called on all of us to let the children and the most vulnerable teach and guide us. “The last shall be first.” “The greatest among you should be the child.” “The humble will be lifted up.” “The poor” and “the poor in spirit will know the kingdom of God.” “Those who lose shall find God… What does it profit us if we win the whole world but forfeit our souls?” A Samaritan – a Muslim, a Mexican, an African-American, whatever is the Other for us – shows us what it means to be a citizen.

Jesus not only spoke to the hopes and fears of the most vulnerable among us, he lived among those hopes and fears and among the down-and-outers replete with those hopes and fears. He dined and walked with outcasts, punks, and has-beens. He became one of them. Not to lift them out of some gutter per se but to show them that they, in their glorious diversity, were the ones worthy of God’s kingdom and the ones to build that kingdom right where they were.

Simply put, trumpism represents everything Jesus stood against. Trumpism preaches the win-at-all cost and belittle-at-every-turn mentality that Jesus rejected and was rejected for.

Yes, Jesus is the easiest and hence best place to look for the antithesis to trumpism. Our culture on the whole still values Jesus and give his words tremendous weight. So pointing to Jesus’ teaching is a powerful vehicle, an expedient mean as Buddhism puts it, that potently helps us counteract the dangers of trumpism. And as a Christian I look to Jesus’ teaching and his life as a teaching as my guide.

But this gospel of losers being winners, this dharma of the last-placers being the first, resides richly in other religious traditions as well. The Tao Te Ching, verse 42 says this:

"What people loathe the most
Is to be orphaned, desolate, unworthy.
But this is what princes and kings call themselves.
Sometimes gain comes from losing,
And sometimes loss comes from gaining."

"The highest motive is to be like water:
water is essential to all life,
yet it does not demand a fee or proclaim its importance.
Rather, it flows humbly to the lowest level,
and in so doing
it is much like God."

On a bit of a side note, if you had to choose three sacred texts to help a spiritual community thrive, it would be the Sermon on the Mount, the Tao Te Ching, and the Dhammapada.

So here we are. Trumpism has made its way to the height of power. What are we to do? First, we must come together as religious communities and do what religious communities do – ground ourselves in the rich soil of compassion and wisdom and mindfulness and/or prayer found in our traditions. Then we need to cultivate, cultivate, cultivate. Cultivate communities ready to do the work of doing justice and loving mercy, walking humbly though not quietly, transforming the world around us as we actualize in Love.

Part of cultivating community is cultivating real friendships and connections. Breaking bread together, listening and dancing to good music, laughing together, experiencing and choosing to experience joy in the many blessings both simple and profound we know. Levity and laughter is a necessary element of spiritual nourishment. We too often forget that. Here’s an idea – “I Love Lucy” nights at church!!

We also need to start preaching loudly in word and deed the gospel of compassion, a purposeful and potent compassion that says the poor first, the hungry first, the refugee first, the ill first, the hurting child first. The most vulnerable must come first and even lead us. We must not only practice compassion and exhibit care toward the vulnerable, but we must join them in spirit. This is what Jesus meant by being poor in spirit. Our solidarity with the poor, the hungry, the refugee, the ill, hurting children must be the benchmark for any, for ANY worldly success.

"Blessed are the poor" and "the poor in spirit," as Jesus envisioned it, "for theirs TOGETHER is the Commonwealth of God." Let us serve the poor, the hungry, the refugee, the ill, hurting children, and let our faithful solidarity move mountains.