Feed Those That Hunger (Times 6)

Do you know what the most frequent story in the Gospels is? Well, the answer is it is a story that has 6 examples of being told. Can you guess what that story is? Here’s a hint: all six stories tell a tale of the distribution of resources. Yes, the resource we are talking about is food.

That’s right. Its the story of Jesus Feeding Multitudes. It is told 6 times, the most frequent story told in the gospels. Here is story from Matthew 14:

13 Now when Jesus heard this, he withdrew from there in a boat to a deserted place by himself. But when the crowds heard it, they followed him on foot from the towns. 14 When he went ashore, he saw a great crowd; and he had compassion for them and cured their sick. 15 When it was evening, the disciples came to him and said, “This is a deserted place, and the hour is now late; send the crowds away so that they may go into the villages and buy food for themselves.” 16 Jesus said to them, “They need not go away; you give them something to eat.” 17 They replied, “We have nothing here but five loaves and two fish.” 18 And he said, “Bring them here to me.” 19 Then he ordered the crowds to sit down on the grass. Taking the five loaves and the two fish, he looked up to heaven, and blessed and broke the loaves, and gave them to the disciples, and the disciples gave them to the crowds. 20 And all ate and were filled; and they took up what was left over of the broken pieces, twelve baskets full. 21 And those who ate were about five thousand men, besides women and children. 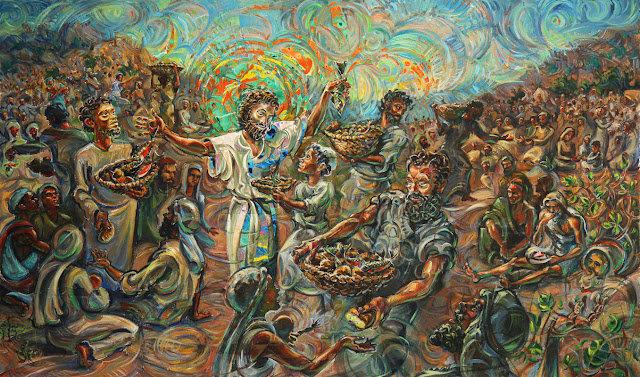 That is one telling. It’s also told in Mark, Luke and John. Outside of the Resurrection, it is the only, the only miracle told in all four gospels.

There are two other times the same story is told but with a bit of a variation. These two tellings come in Matthew and Luke. In these renditions, Jesus feeds 4,000. Now, we are not sure that Jesus fed one crowd of 5,000 and then later fed a crowd of 4,000. They might be the same event. We don’t know. But in all, the same basic story is told six times! More than even the Resurrection.

The mere fact that all four gospels include the story of the feeding of 5,000 and that Matthew and Luke include an additional story with the same plot and moral points to the importance placed on that story and that moral.

What is that moral?

It’s as if the mere repeating of the same basic story highlights what is most crucial in following Jesus. Feed those that hunger, and, as it was done each time Jesus fed the crowds, begin with the children.

There is something else of interest here. We get to it by looking at what exactly the people eat. Remember when the Community Meal program used to be called “Fishes and Loaves”? Well, it got its name from this story. Jesus had served and the people ate a meal of fish sandwiches.

Now, grilled fish and whole grain bread is a very healthy meal. It is Mediterranean kind of meal that people throughout the world for ages and ages have lived on and lived long on.

If Jesus passed out the Ancient Palestinian equivalent of potato chips and twinkies, we might see the story a little differently.

In America, hunger remains a problem. At this very moment, a child is waking up in America hungry and will end her day hungry. In the richest country in the history of the world, that is a sin. That we have enough food and funds to feed the world a couple times over but hunger still kills human beings – that is just as much a sin.

There is also the issue of undernourishment and malnourishment. Fellow human beings in poverty-stricken urban areas and rural areas alike might be eating, but are they eating well? Here is another sin – that the worst-kinds of food, the least healthy, the most processed kinds of foods, the worst examples of fast foods, it is all dirt cheap while the healthiest kinds of food are often gold-dust expensive.  We are incentivizing undernourishment, and corporations making millions from it, instead of full-nourishment and local farms and farmers markets.

Thankfully, there are places like Quabbin Harvest Food Co-op. Did you know that Quabbin Harvest has “the highest enrollment rate for the Healthy Incentives Program, a program which aims to give low-income residents greater access to healthy and locally-grown fruits and vegetables"? That is tremendous. Yes, it is still expensive to shop at food co-ops, too expensive for many, but the trend is in the right direction.

There is another wonderful trend happening, and our neighbors The Farm School are a perfect example of it. Seeds of Solidarity is another perfect example. Let me introduce that trend with a snippet from a song by the group Arrested Development, one I loved back in college.


The Grow Your Own Food movement basically aims to help people exit as much as possible the system where corporations profit from the absolute human necessity of healthy food. Having your own garden is a simple example of this. Our raised bed garden that The Grange has put in and maintains is our small way of supporting this. Or having your own small farm, which the Farm School and Seeds of Solidarity help to teach people all the time to do, is a more significant example. Teach a man or woman to garden or farm, he or she will eat forever.

All of this falls under the terrain of Food Justice, the work of making good food accessible to all and affordably so. No one should go hungry or undernourished. A goal straight from our story. Someone in intercity Springfield should have as much access to affordable, healthy, and fresh produce and foods as someone in Amherst, Mass. Public land, especially in the intercity, should be allotted for people who don’t have land and can’t afford to buy land to grow food.


The real take away in the story is the miracle of compassionately passing-on, the giving of that which sustains us. The miracle is making a little go a long way by simply being willing to share. The compassion and wisdom of sharing costs so we can make good food affordable, the compassionate sharing of the wisdom and knowledge of growing your own food, these are themselves little miracles we get to share. And here’s the thing - we are all called to such miracles. Let’s make them happen!