A Christmas in Korea 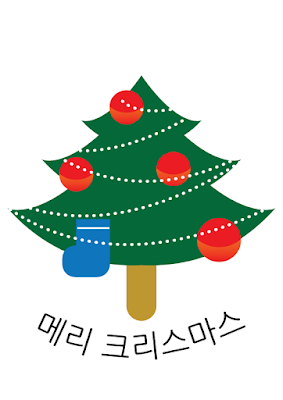 In August 2000, Holly and I traveled to South Korea and for a year taught conversational English at a university. There are many Christians in South Korea. However, Korea remains Buddhist-Confucian in culture. This is especially so in more rural places like Iksan, the city where we taught. There, the Buddhist-Confucian culture is still mostly unadulterated. Christmas was certainly celebrated in Iksan but more like St. Valentines Day in the U.S, which is to say not so significantly spiritually.

It was for us the first and only Christmas spent in a culture not Christian (and Christmas) centric. However, the Christmas in Korea was one of the most spiritually significant for me .

On Christmas night 2000, I took a walk down Daehagno. From one of the many shops “Silent Night” lilted. That it was Frank Sinatra singing the beautiful carol only propounded the homesickness it moved. 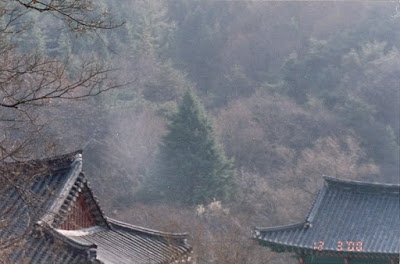 “All is calm, all is bright…holy infant so tender, so mild. Sleep in heavenly peace.”

The first four months of my year and half in South Korea saw my Buddhist practice grow deep roots. I immersed myself in the Buddhism of Korea. I visited Buddhist temples every chance I got. I studied Buddhism a professor of Religious Studies at the Buddhist-affiliated University where I was teaching English. I meditated as often as I could.

Yet despite this, or maybe because of it, my connection to the teaching of Jesus was reawakening within me. When you are in unfamiliar territory and cultural differences can overwhelm, you seek what is most familiar and safe.

Partly moving this Christian reawakening was no less than the Sinatra “Silent Night” croon.

The streets of Daehagno were not exactly silent. Virtually all the shops were open and busy. And there was no snow falling. No christening of brighter than usual streetlights. No enlightenment ignited by stars guiding me or shooting across the sky above me. Only a sense that I was remembering something I once knew in my heart and not merely in my head.

“Radiant beams from Thy holy face with the dawn of redeeming grace. Jesus, Lord, at Thy birth”

Ever since I parted ways with Christianity in the mid-90s, Christmas increasingly seemed unimportant. It seemed more a Capitalist enterprise enjoyable to only the children who did not know the difference. Like a fake Christmas tree, I placed Christmas in the cluttered basement of my mind. Because of my disillusionment with the Evangelicalism I grew up in and grew under, I never took the tree out to adorn and appreciate. I felt cheated by the seeming narrow-mindedness that came with my Evangelical rearing. I felt lied to. And Christmas was simply not pertinent.

What’s more, my departure from Christianity had complicated my relationship with my family. I was no longer the Evangelical minister-to-be or the great young Christian hope of my church. The isolation from my past both angered and hurt.

Thankfully, the silence of that moment and the music of a Sinatra serenade began releasing something within me.

Despite my best efforts, I could not understand most of the language spoken by the Korean citizens of Iksan passing me by. I could not find full inclusion in the culture I now lived within. Even the Buddhism I encountered sometimes seemed foreign.

Then came the longing for home in every sense of the word, for the insulation found there, away from my isolation.

For the next few days I pondered the words “Holy Infant.” Influenced by my Buddhist learning and understanding and practice, I had sensed for a while that every infant is holy. What was special about Jesus’ birth aside from the historical importance given to it?

I then realized how radical the story of Jesus’ birth really was. In many ways, it’s the original rags to riches, albeit spiritual riches, story. But unlike the Capitalist take on the story, which normally adds the proverbial storyline of pulling oneself up by bootstraps. There is no moving up to the middle class here. There is no Protestant work-ethic morality tale here. Only grace abounds here.

At the same time, the subversive narrative that a king shall come in the form of a narrativeless baby turns all political expectations on their heads. The plotted climb to power in order to overpower and conquer is the antithesis in the story of Jesus’ incarnation. The Messiah as a political hero and warrior king, which was expected in a Messiah, is what the story subverts.

The thesis is that Jesus, the Everyinfant, is holy. Jesus – born of an anonymous working class family, a family belittled even more by its community because of its perceived out-of-wedlock child – is born a king. Jesus –  born not in a home, not even in an enclosed building, but in an open barn open to the elements – is born the anointed one. There is no working up to this status. There is no campaign or fundraising. There is no climbing up the power food chain.

Sons and daughters of God are simply and humbly born. In the innately humble birth, the birthing process not being pretty or “clean”, in the mere existence of a newborn, we envisage the image of God. And Jesus teaches us in his first breaths on this earth, this very earth.

This was the good news realized as I walked the streets of a Korean city in the beginnings of Winter. The truth of divine humility and newness with us was the Christmas story reborn in me as I heard Sinatra croon of Christ.


Finding room for Jesus in the inn of my mind would be my living koan, my way to salvation, thereafter. It would be a way initially pondered in Korea, the beautiful land of morning calm, its many mountains standing as wind-filled monuments to the search.