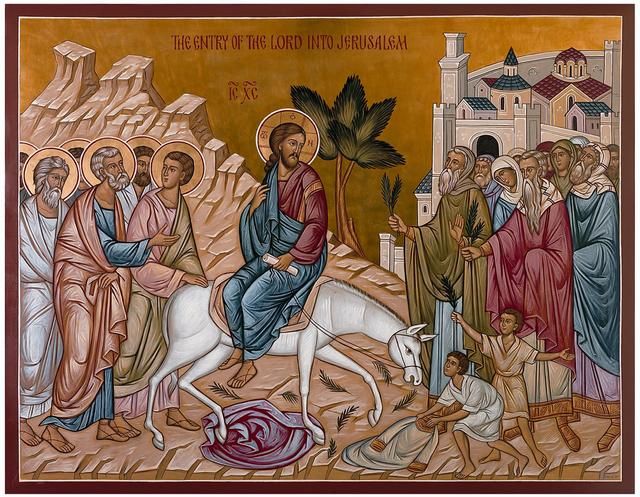 Yeshua's disciples were never as certain of their faith in their teacher as in this moment, this majestic moment. He processing into Jerusalem on a colt. A vibrant, chilly Spring day, the full moon still distant in the sky in midmorning. He had become in their three years together more than just their teacher, their rabbi. He had become a friend, a brother, a kindred spirit to each and every one of them. Each of them felt a special bond with him and with each other.

Collectively, they were a traveling band of vagabonds, sharing an honest togetherness born of intimate and lengthy conversations, grueling days on the road going from town to town, the struggle against the hypocrisy and prejudice that isolated them. They were misfits, questioners, working people with big dreams who all felt belonging in this community of misfits, questioners, and dreamers. As Spring was arriving and the festiveness of Passover was beginning, they all wondered how this sense of finding the meaning they were looking for could be shared with their people.

Their teacher rode his colt into Jerusalem. All preceding experiences had built up to this moment.  The love they felt profoundly for their rabbi gave way to veneration in these moments, moments the hooves of the colt marked the time of. It was a veneration not planned or plotted. It was an improvised veneration that spilled over from something deep inside them. These were hearts filled to flowing with memories, pride, and faith. And so they placed their coats on the path Jesus took, coats and leaves and whatever that softened the journey.

Yeshua to the city awaiting his arrival was certainly a stranger, a stranger, a nobody from the nowhere of Nazareth. His disciples knew this. Nonetheless, they surmised that the city hadn't heard him teach yet, they hadn't sat and internalized his wisdom or felt the warmth of his compassion. He would make hearing hearts out of them. He would go from being a nobody to the maestro he was in no time. Yes, the disciples' faith had climbed its highest peak.

As for Yeshua, as he rode into Jerusalem, he almost immediately went to a deep place inside himself, a reservoir that reflected with special power the truth of all that was. It was not a trance. He was fully conscious in the grips of prayer.

His mind then went to the relationships that grounded his life and inspired him. With his mother who had taught him everything he in a lasting way knew. With his father who loved him deeply but was petrified to express it. With his siblings who marked and shared his childhood and pushed him to be better. With his disciples whom he loved in a way even he could not describe. He embraced the envisioned face of each person that arrived in his mindful thoughts, his family then his disciples and said words only they could receive. To the visage of Peter, with a firm and insistent voice as if pleading an urgent case: I- Know-You-Love-Me. To Thomas he whispered, "ponder What cannot be understood." To John he hummed a praise song to the Creator. To Mary Magdalene, he kissed her with a holy kiss and smiled, "love never fails." To James, John's brother, he calmly spoke one word - "now." To Judas he cried, "don't give up." To Andrew, he warmly quipped, "my humble friend." To Martha he nodded, "welcoming one." To his brother James, "my blood, my heart, my brother." To his father he embraced with tears. To his mother, he just held her face in his hands.

He lost himself in a memory. He relived that memory in real time. His mother was seated in front of him, then 14 years-old. They were discussing the 118th Psalm. His mother's words replay as if Jacob's dream.

"'His steadfast love endures forever.'"
"The text repeats this twice."
"'His steadfast love endures forever.'"
"Then the open gate of righteousness. The open gate of righteousness is the open gate of the Lord. They are the same.
The righteous walking through that gate, walk through the gate of the Lord, and walk into the city of salvation.
The one, singular gate of Righteousness and God. It is open to everyone --
The despised, if righteous, can enter that gate.
They can enter and be placed as the central, the most important cornerstone of the temple within the gate's walls.
The last and the least, the lost and the lowliest, they are not forgotten by God whose love is steady and lasting."

His Mother says these words to him, her tears progressing in tenderness. Her voice assured and quiet with the tenacity of the convinced. He slowly shuckling, rocking back and forth, eyes closed as he breathed in her words. Her tears becoming his tears.

"God. Light. Adonai, the One who gave light to the world. The One who is Light. The Holy One gives us, the despised, the forgotten, the despairing and desperate, the poor and the empty, He gives us Light. Like a father starting a fire in a cold house in the dark of winter."

His steadfast love is steadfast forever. It is a stubborn love that never lets us go. It is a stubborn love that crafts us, builds us, encloses us like your father builds a house. Men may despise us. They may see our house as small, insignificant, impoverished. But our house is the House of the Lord. We, even we, especially we, are God's masterpiece. We are the cornerstone of the Temple."

"Yeshua, my beautiful boy, do you understand?"

Jesus entered Jerusalem and rode to Temple, always the first stop when coming into the City of God. As he neared and the din and the noise became pronounced, he increasingly grew perturbed. Every year at Passover, the Temple became abuzz and busy with the activity of the holy week. But this year it struck Yeshua as wrong. He wasn't sure if this year was especially chaotic or his spirit was simply seeing more. But he could not assuage his poignant feelings of trouble. He climbed off the colt. A street preacher hocking animals for sacrifice and shilling out money seemed to rise above the rest of the cacophony.

Jesus felt his heart begin to pound. It sounded like heavy stones hitting the ground, reverberating in his feet and the rest of his body. Blood ran to his face, a righteous red.

"Offer up God your best! I have the purest of sacrifices, here, the purest for the best price. Need a dove, a lamb, a goat. Well, I've got the best. The absolute best. None better anywhere. They trump everything else here."

A widow in tow with a child around 10 walked up to the street-preacher. She was adorned humbly, obviously poor, her head covered with a black burka that was worn and weighed with the dust from a long journey. The boy was dressed in worn-out clothes and sandals that were barely hanging on. The preacher clamored about as he stopped to sell the woman something. He worked hard to up-sell her. A dove instead of a pigeon, both the Passover offering for the poor, the dove a bit of a step up. The widow suddenly grabbed her kids and walked away. Her burka fell from her face, agitated and despairing. The preaching vendor returned to his preaching.

The sight of the Temple, the Temple of his people, corrupted by disregard for humanity, disgusted him to the core. The lamb that he was in this moment became a lion. And the lamb he was and would remain, the lamb left remaining in the aftermath, would face the consequence.

All that said, hope, like life, is a tenacious thing.
No comments: