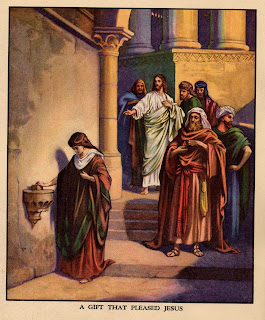 We live in a culture that values wealth. I think this is abundantly clear. We highlight our rag to riches stories. We place wealthy people on pedestals and see them as people to emulate. We elect into power mostly wealthy people. We measure the state of our country and other countries by measures of economic wealth.

The same can be said about the religious culture Jesus confronted… It said in many ways in society, blessed are the rich.

That is why Jesus presented and still presents a problem for many.

Jesus did not see material wealth as an inherent positive. In fact, he saw it as just the opposite. Material wealth for Jesus served as a detriment when it came to what Jesus was all about – God’s Commonwealth, which most biblical translations translate as the kingdom of God.

God’s Commonwealth is the translation suggested by renowned theologian John Cobb. This is Cobb’s rationale for translating Kingdom of God as Commonwealth of God.

The Greek phrase that we translate as “kingdom of God” is basileia theos. A basileia is a politically defined region. It could be a kingdom, and indeed most of them were, but the term does not include that as part of its meaning. If you suppose in advance that God is like a king, then the basileia of God will certainly be a kingdom. But if God is like a father, then his region or land will not be a kingdom. We might describe a father’s basileia better as the family estate. Depending on the kind of father we are talking about, that might be governed in various ways. When we consider how Jesus talked about God, the answer is that it would be managed for the sake of all who lived there with special concern for the weak and needy. We have no word for this, but my proposal is “commonwealth.” Jesus’ message is that the “divine commonwealth is at hand.” Everyone should reverse directions and join in this new possibility. There is no reason to think of the God whose basileia this is, as a monarch!

Indeed, Jesus’ vision of a community based in and grounded in the reality of a loving God, this vision of the beloved community of God, included a sharing of wealth, a common wealth.

Think of heaven, which when we pray the Lord’s Prayer we pray will come to earth. Thy commonwealth come, thy will be done on earth as it is in heaven. In heaven, is there poverty? In heaven, is there a disparity between those who possess wealth and those who do not? No, in heaven, whatever kind of wealth there is, it is shared, it is held in common. Jesus wants that model brought to earth.

As for personal wealth, Jesus never condemns it per se. We often misquote Jesus’ apostle in I Timothy when it comes to money and wealth. Money isn’t the root of all evil, but the love of money is. Jesus in the gospels simply wants money and wealth to be used wisely and compassionately, serving the goodness of God and God’s commonwealth.

Jesus’ deeper concerns are not wealth itself, but what wealth does to the rich, and what it means for the poor.

Jesus is a good follower of Tanakh and Yahweh. In the Tanakh, Jesus’ Bible, the wealthy are commanded to protect and give to the poor so that the poor are not destitute and do not die. This is what Moses and the prophets teach. When Jesus tells the rich man to sell his possessions and give the money to the poor, it is fully in keeping with the Yahweh-faith.

Where Rabbi Jesus is unique is that he claims God sides with, indeed favors the poor, not the rich. We see this in Jesus very first introduction of himself and his ministry. He claims in Luke 4, he’s come with good news first and foremost to who – to the poor. He goes on to say in the Sermon in the Plain in Luke 6, blessed are the poor and woe to those who are rich. He lauds a poor woman who gives the little she has over and against the rich who give more but only a portion. Again and again, Jesus highlights the last, the least, the lost, commanding we include them first and foremost.

Now, I want to be clear, this tendency to make money an idol is in all of us. The wealthy are not any different than us in an essential way. Judge lest ye be judged.

Christ’s larger point is to let go of those things we hold too tightly or hold too tightly to for the sake of God’s commonwealth. Christ’s point is to look at every human being, especially the poor, as if we were looking through the eyes of God who loves each of us like a loving parent loves her children. Does a loving parent allow her children to be poor when there is so much wealth to be shared? I think we know the answer to that question.

I’d like to close with a reading of Jesus’ famous beatitudes which gets at the ethos of God’s commonwealth. This reading is from a new translation of the New Testament called First Nations Translation. I read it in honor of Indigenous People’s Day tomorrow: