For since death came through a human being, the resurrection of the dead has also come through a human being; for as all die in Adam, so all will be made alive in Christ. But each in his own order: Christ the first fruits, then at his coming those who belong to Christ. Then comes the end, when he hands over the kingdom to God the Father, after he has destroyed every ruler and every authority and power. For he must reign until he has put all his enemies under his feet. The last enemy to be destroyed is death. 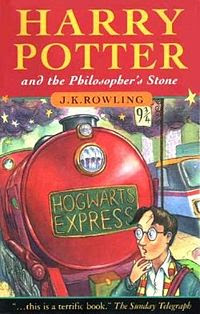 Just Thursday, in the waiting room for a doctor’s appointment for Corey, there was a young girl Corey began talking to, as he often does whenever there is a kid his age around. The young girl was 9, as Corey found out which he also often does when there is a kid around. On her lap she had two books from the library. She was reading Harry Potter and the Goblet of Fire, which is the largest of the 7 books at some 500 pages. She was 14 pages in. The other book, also a library book, was Harry Potter and the Prisoner of Azkaban, which she just finished. She had begun reading Sunday and finished on Thursday!

Why? What is it about the books?

From my reading of just the first book, it seems to me that Harry Potter is the Everychild. In the character of Harry Potter, we have represented the child’s journey, process of growing-up, with all that this entails.

There is the added dimension of grief that Harry Potter must deal with. The first book begins with an 8 year-old Harry living with his Aunt and Uncle. He lost his parents when he was an infant. And the aunt and uncle, and their spoiled and ill-behaved son Dudley, all treat Harry horribly. He sleeps in the closet, he is given very little to eat, he is not allowed to do any kind of extracurricular activity, he is spoken to unkindly and disrespectfully, and Dudley, the son, is the epitome of a bully toward Harry.

Harry, despite his lot in life, is supernaturally balanced. This is not to say he likes the abuse, but he endures it and even rises above through the strength of his will and heart. However, he is vulnerable, overpowered, dependent and made to feel weak by his environment.

How many children have felt this way? How about “all”?

Harry Potter and the Philosopher’s Stone offers a ray of hope, however. The first part of the book revolves around uncovering the mystery of Harry Potter’s identity. There are hints that Harry is special despite his context. And there is something hidden about the family that has adopted him.

When letters for a Hogwarts School begin being delivered to the home Harry lives in, letters saying he has been accepted into their Boarding school program, the mystery is heightened. That his mean aunt and uncle discard the letters, despite Harry knowing they were addressed to him, only makes the mystery unbearable.

Finally, the content of the letters is revealed to Harry by a giant of a man named Hagrid who breaks into the island home of the aunt and uncle's. They have taken the two boys to the island to escape the constant deluge of letters being delivered to Harry and discarded by his so-called family.

The mystery of Harry’s identity and the content of the letter is revealed to Harry and to the reader simultaneously. Harry is a wizard born to parent who were wizards. His parents were killed by a renegade wizard named Voldemort. The renegade wizard attempted to kill Harry, but failed, which turned Harry into a legend in the wizard world. Harry’s innate strength prevented him from being killed by the evil Voldemort. This failure effected Voldemort’s departure from the scene, bringing peace to the Wizard World.

Harry was a wizard and a legend but didn’t know it. Being told this truth, his life is transformed. Despite his adopted family – his aunt was his mother’s normal human sister - not wanting him to go to Hogwarts School of Wizardry, Hagrid assures that he does go. This begins Harry’s astounding journey.

Realizing you are special. Yes, it could be said that this sentiment has been overdone. The narcissism in our society is rampant, especially in the Harry Potter generation. Mr. Rogers is critiqued for this very reason. His focus on telling children that they are unique, special, and to be loved just the way they are has been ridiculed and criticized as initiating our demise into a narcissistic culture. Harry Potter, some have said, confirms this by offering up supernatural protagonists who are all like normal kids but special at the same time. Special kids with special gifts -- this is true for everyone. Kids are all special like Harry Potter.

That is a misinterpretation of both Mr. Rogers and Harry Potter, I’d argue. But these critiques do offer us something important to think about.

That we all, ALL, are, in Christian lingo, created in God’s image and therefore all unique, means no one is inherently better than the other. Because we are ALL God’s image carriers means there is an innate equality to be risen to. We are all created equal, as Thomas Jefferson notes. This divine equality which we all share is the natural antidote to narcissism.

That said, we must consider the culture in which both Mr. Rogers and Harry Potter felt the need to highlight the fact of our God-image-carrier status. We see that culture represented by the culture Harry Potter grows up in. His aunts and uncles attempt to make him feel less than nothing. They ridicule, diminish, degrade, attempting to shatter his ego.

A culture that says we are sinners in the hands of an angry God does the same, does it not? A culture that says you are born a sinner and will die one ridicules, diminishes, degrades, and in some cases shatters our sense of self – it amounts to putting us in a closet and hiding us from us who we are.

Harry Potter actually does a great job of reminding us that there is evil in the world. It reminds us that not everyone applies their uniqueness, their God-image-carrier status in good ways.

In the first book, we see this in the character of Draco Malfoy. He is like Dudley, someone who thinks he is special in a harmful way. The balance, the balance that Harry Potter comes to embody, is seeing we are each equally special, equal in the eyes of God, and we are to act accordingly, seeking to make that equality a living, working reality.

But it must not stop there. We must also acknowledge that the Universe was created Good and that all humans too have that of God in them, as the Quakers say. An insight into our shared, our SHARED nature, is the next step in our own school of Hogwart learning. We are each created in God’s image. We are each equally special in this way.

Yet there is more to learn even after this. There is learning to act accordingly, in accordance with the fact that when we look at another person, we are looking at a being who carries within them the image of God. Treating others on the basis of this truth makes all the difference. We treat them like we would want to be treated because in the most essential ways we are connected. We share God’s likeness in us.

Again, we see this in Philosopher’s Stone. It is clear that Harry Potter, because of his parents, is a natural when it comes to being who he is, a wizard. And there is some cockiness there even early on. But Harry soon learns that relying on what is inherent, what is inherited, what is natural to us, is not enough. We have to do the work, building strength in our hearts and minds.

I have been teaching a class on American Popular Music, as you know. This week we discussed Jazz and how jazz musicians have to be good improvisers. Yes, there is an element of being born with good improvisational instincts. But the art of improvisation, the art of creating art in the moment, is not something that is done haphazardly or magically. A good improvisationalist doesn’t simply grab good music out of the sky and begin playing it. There is a lot of practice involved. A lot of foundation-building through hard work and tenaciousness.

Similarly, we are born with God-image-ness, but it takes practice – prayer, meditation, works of compassion, community – to build upon that God-image-ness we carry.

We need a Hogwart school of our own. And the name of that school is The Church. Church brings us together to pray together, to meditate together, to on Sundays sit with God and express our deepest gratitude together, to lift others up together, to show compassion to others together. The Church is the place where we build the muscles of what Buddhism calls the three means – wisdom, compassion, and mindfulness.

So Harry Potter and the Hogwart School teaches us a lot, maybe things we never really considered when thinking about the book series. It reminds us of the reality of our own vulnerability and need for others. It teaches us about the importance of realizing who we really are. It helps us to see the need to build on our own spiritual inheritance and from that foundation spiritually grow and develop and love. It shows us the significance of a community that helps us to grow, develop, and learn to love.

That’s what I learned from reading Harry Potter and the Philosopher’s Stone. Thus ends my book report of a sermon.