To Be the Apprentice of a Newborn

Why shepherds? Why did God first give the good news about Jesus’ arrival to the shepherds? Yes, Jesus’ family of course knew. But the shepherds were the first neutral party to hear the news. Why? 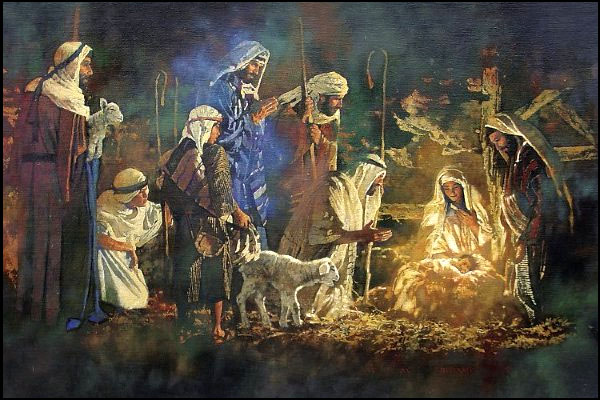 There are a few reasons, I’d say. I give them quickly before I get to the heart of what I want to say.

John the Baptist, Jesus’ cousin, will later call Jesus the Lamb of God by who takes away the sin of the world. So the shepherds come to see this new lamb who will change their lives. There is a foreshadowing here.

But an even more telling reason for why it is shepherds that God first reveals the good news to is seen in Jesus’ lineage. Jesus is the son of David, the Messiah, the new David who will take the throne as King of Israel and renew Israel to greatness again.

And who was David? A shepherd. The shepherds represent David. David in the form of the shepherds come to confirm that here is the New David, the awaited anointed one, the Messiah, King of Israel. David via the shepherds is blessing and anointing Jesus, passing the torch to this babe King.

Fine and good. We got some nice bits of knowledge here. But when it comes to spirituality, when it comes to our relationship with God, where is the importance? Who cares that it was shepherds God first comes to?

Well, we might ask, who are we in the story? Are we more like a newborn named Jesus than the Shepherds?

This one in the manger, the infant is the master. The prophet Isaiah talked about a child that shall lead us. “The wolf will live with the lamb, the leopard will lie down with the goat, the calf and the lion and the yearling together; and a little child will lead them.”

This is that little child, the Christian tradition tells us. This is the little child leading us even in a lowly manger given because there is no room to stay in, no crib to be laid.

This is the little child we are to look to as not only our leader sent by God, but as our model for leadership, as our benchmark for what it means to lead – a shepherd king lying in a manger, leading us with his mere presence.

Are we present enough to see this?

We – the shepherds – are the apprentices. We look to this infant lying in manger to teach us the way of selflessness for the sake of the flock. The baby surrounded by the oxen and the donkeys teach us what it means to guide and lead, by being present with those we guide and lead. An infant is without thoughts about the past or the future, but resides in the moment. An infant does not judge us or ponder things for too long but simply breathes in and out with us, letting us know what we need to do by our watching and listening.

And wouldn’t you know it, it is through the common birth of a common son, born to soon to be homeless, refugee parents, it is through this common human story that divine truth, joy, hope, and love is made real.

Our mentor, the one we seek to be the apprentice of, is us, is like us, is just as vulnerable, just as weak and needy, just as prone to falling and losing. Baby Jesus, or even the adult Jesus, would not be someone we’d call the winners among us.

There are some whom I know would not find much alluring in this Jesus who in order to help others win the game of life becomes the loser. This becoming the loser for the sake of the salvation of others begins from the very beginning. Jesus is a child who is not even born in a room of a shoddy motel, but in the barn outside of it. Jesus is a child who goes from being born amid farm animals and laid in a feeding trough to then having to flee to Egypt to escape the persecution and violence of his government. Far from victors of the world’s ways, Jesus and his family are victims, victimized by raw power, hate, and violence.

And so from the crib to the cross, Jesus walks the way of the lowly good shepherd. He defies raw power by being a servant. He overcomes hate with love. He resists violence with nonviolence. He accepts his victimhood. As the ultimate victim, he becomes the victor. And in him, salvation is given and sin and death defeated, as the Universalist teaching tells us.

So as we enter this Christmas week, I pray that you look past all of clutter and chaos all around us this Christmas season and look to the One we celebrate, the One lying in a manger a vulnerable and frail as a newborn can be. May we see a lesson in the fragile moments of that newborn’s presence. This tender moment, this tender One, here to save us, namely from ourselves, trumps all pride and greed and ignorance. This little One whom Universalists believe extinguishes the fires of hell with the light of hope, this humble One presents us apprentices with a priceless grace, a renewed life, a love that helps us to love God and others. May we receive the gift and live accordingly.