In the Offense of Liberation

* Based on sermon but with different title 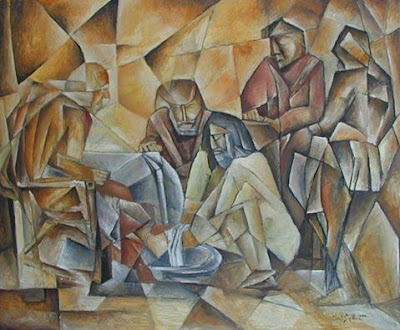 He poured water into a basin and began to wash his disciples’ feet, drying them with the towel that was wrapped around him.
When he had finished washing their feet, he put on his clothes and returned to his place. “Do you understand what I have done for you?” he asked them. “You call me ‘Teacher’ and ‘Master,’ and rightly so, for that is what I am. Now that I, your Master and Teacher, have washed your feet, you also should wash one another’s feet. I have set you an example that you should do as I have done for you. Very truly I tell you, no servant is greater than his master, nor is a messenger greater than the one who sent him. Now that you know these things, you will be blessed if you do them.


If you read the story of the Passion of Christ with new eyes, as if for the first time, I think it becomes pretty obvious that this figure called Jesus of Nazareth is a figure not to be ignored. He is pushing buttons. He is getting under the skin of just about everyone. He is stirring trouble.

Why? Why is this un-ordained, unofficial religious teacher from the back woods of Nazareth such a thorn in the side of the powers that be? What is it about him that disturbs the establishment and garners so much support from the common people?

Have you ever noticed that extremes disturb some yet also attract some folks? We see this in our political season, that is for sure.

Barry Goldwater in 1968 offered us some rather infamous words. He said, “extremism in the defense of liberty is no vice.” Folks cheered then. Folks cheer now.

Not only this, Jesus himself was extreme in his humility. This makes sense. There is a connection between love and humility. We know this in our relationships. If love is to last, if love is to live, if love is to win, it takes humility on those who love. Pride and selfishness is the enemy of love. Humility and selflessness is love’s nourishment.

In the Palm Sunday story, we see Jesus’ humility clearly. Here he is, a King, riding into Jerusalem not in a limousine of the best horses and a coach of gold, not with a banner or a hat about greatness and victory, not with speeches embodying strength and winning. No, Jesus rides into Jerusalem on a donkey, silently.

Later, after that donkey ride into Jerusalem, we have Jesus with his disciples again pointing directly at extreme humility. We read in John 13 Jesus' act of servanthood, an act that foreshadows a greater, more brutal act to come, that of dying on the cross.

Jesus in this act of washing his disciples’ feet defines godly leadership for us. Embodied humility, embodied service as a servant, not just verbalized humility or service or servant-hood.

How do our leaders or potential leaders measure up to Jesus’ definition, his embodied definition of leadership?

So Jesus was an extremist for love and selflessness.

Was he defending liberty with his extremism? If we change that word defend to offend, and if we change the word liberty to liberation, we come up with a more apt description. Jesus’ extremism was in the offense of liberation.

He was marching down the field to win all peoples’ spiritual liberation. But beginning with the least, the lost, the losers in the world’s eyes, beginning with those imprisoned and oppressed. Jesus makes this clear as he starts his ministry. Luke 4 quotes Jesus as defining the gospel. Jesus said,

“The spirit of the Lord is upon me,
because he anointed me to preach the gospel to the poor.
He has sent me to proclaim liberation to the captives,
and recovery of sight to the blind,
to set free those who are downtrodden.”

And at the foundation of this gospel of liberation is love and compassion born of God. At the heart of this liberation is a love so extreme that it gives self away and embodies the true self of God at the same time.

In English, the word offense has a double meaning. In can mean the opposite of defense. Or it can be related to offending or being offended.

Jesus uses ultimate love as his offense to win us liberation. But this offense of radical love, in our world, is offensive to some, isn’t it? The love and humility Jesus radically offered still offends some. The gospel of Mark tells us how Jesus was scandalous to the self-righteous and self-important. Mark 6:3 says, “They were deeply offended about Jesus and they refused to believe in Him.” The word deeply offended here is ‘scandalon’ from which we scandalous.

As our culture and times show, anyone can be scandalous. Anyone can be offensive with their words or deeds. The question is what is the point? What is the goal? What is purpose of our actions? For Jesus, his offense to win liberation and his offense, his scandal, were one and the same. Jesus’ means and ends matched. The aim, the goal, the end, was a liberating love, and the means he used to get there was liberating love. The offense he used to get us down the field and what offended so many in the process was one and the same - he loved the most excluded, the marginalized, the oppressed equally and walked with them, talked with them, served them, died in their place. And love, and the liberation love naturally brings – this was the aim of his so freely loving us.

I close with a Christian paraphrase of Goldwater – Extreme Love in the offense of liberation is Christian. In other words, as it was in Jesus, let God’s radical love be the benchmark in all you do, including in who discern to lead us and vote for.