2 They had journeyed from Rephidim, entered the wilderness of Sinai, and camped in the wilderness; Israel camped there in front of the mountain. 3 Then Moses went up to God; the LORD called to him from the mountain, saying, “Thus you shall say to the house of Jacob, and tell the Israelites: 4 You have seen what I did to the Egyptians, and how I bore you on eagles’ wings and brought you to myself. 5 Now therefore, if you obey my voice and keep my covenant, you shall be my treasured possession out of all the peoples. Indeed, the whole earth is mine, 6 but you shall be for me a priestly kingdom and a holy nation. These are the words that you shall speak to the Israelites.”

There a sign that I guess some people have purchased and placed in their home. It is a humorous sign, I suppose. Its at least cute to me. The limerick quality is endearing. The sign reads, “out of all the fish in the sea, I chose you and you chose me.”

As for the Israelites, this feeling of chosenness despite the circumstance of feeling the world has rejected you en masse, this feeling of being special in God’s eyes though maligned by the world, it is extraordinarily profound and resonant. Here are the Israelite people, perennially beleaguered, beaten-down, bullied-on, the Charlie Brown among nations, and God chooses them?

To more clearly see this grace-filled relationship with God and Israel, let’s review the story. God chooses to build a nation through barren and childless vagabonds, Abraham and Sarah. This unthinkable possibility indeed happens. And Israel grows. But that nation full of early promise eventually find themselves in bondage. God still chooses them, a nation of enslaved people. And chooses to liberate them. God calls on a foreign-raised fugitive who killed a man in a crime of passion and fled. That man, Moses, is working as a shepherd and accepts the call to free his people in bondage in Egypt.

Eventually, the Israelite nation makes it to the Promised Land, the temple in Jerusalem is finished, and the nation develops only to be repeatedly overcome, overthrown, occupied, and oppressed by more powerful nations and empires. Still, God remains with them, sending messengers to tell them what they need to do to realize their promise. And God in turn promises a messiah to come and return the nation to its former faithful and flourishing ways.

Out of all the fish in the sea, God chooses the Charlie Brown among the nations, and in so doing, helps them to see their promise, their dignity, and their gift to the world.

5 Therefore, since we are justified by faith, we have peace with God through our Lord Jesus Christ, 2 through whom we have obtained access to this grace in which we stand; and we boast in our hope of sharing the glory of God. 3 And not only that, but we also boast in our sufferings, knowing that suffering produces endurance, 4 and endurance produces character, and character produces hope, 5 and hope does not disappoint us, because God’s love has been poured into our hearts through the Holy Spirit that has been given to us.

6 For while we were still weak, at the right time Christ died for the ungodly. 7 Indeed, rarely will anyone die for a righteous person—though perhaps for a good person someone might actually dare to die. 8 But God proves his love for us in that while we still were sinners Christ died for us.

While we were still weak, at the right time, Christ comes to us, to be present with us, to lift us up. 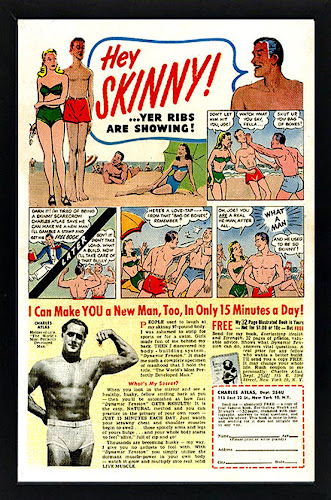 This brings to mind the old Charles Atlas ads. I’m dating myself here, I know. But remember those ads. A skinny, weakling type is at the beach. He is there minding his own business when a big, brawny bully comes along and kicks sand in his face. Being skinny and weak, he can’t do anything about it.

That’s where Charles Atlas comes in with hope and with strength training.

Who does Christ choose in this story? It is obvious, isn’t.

Christ like Charles Atlas or like Miyagi in Karate Kid comes to those down and out, weak and alone, befriends us, and lifts us up to be what Christ wants us to be.

It seems to me, there is a central paradigm the Bible gives us, both in the Hebrew scripture and the Christian New Testament. It is the central paradigm, a paradigm we see again and again. Here is that biblical paradigm:

God, first and foremost, sees the most vulnerable, comes to them, transforms their hearts, individually and collectively, and changes the trajectory of their lives.

Let me say that again, the central story of the Bible is this: God, first and foremost, sees the most vulnerable, comes to them, is present with them, transforms their hearts, and changes the trajectory of their lives.

Do you see this too? If you don’t, I pray you at least ponder it for a bit.

Here’s another example of what I see as the central paradigm, it is found in our gospel reading.

35 Then Jesus went about all the cities and villages, teaching in their synagogues, and proclaiming the good news of the kingdom, and curing every disease and every sickness. 36 When he saw the crowds, he had compassion for them, because they were harassed and helpless, like sheep without a shepherd. 37 Then he said to his disciples, “The harvest is plentiful, but the laborers are few; 38 therefore ask the Lord of the harvest to send out laborers into his harvest.”

10 Then Jesus summoned his twelve disciples and gave them authority over unclean spirits, to cast them out, and to cure every disease and every sickness. 2 These are the names of the twelve apostles: first, Simon, also known as Peter, and his brother Andrew; James son of Zebedee, and his brother John; 3 Philip and Bartholomew; Thomas and Matthew the tax collector; James son of Alphaeus, and Thaddaeus; 4 Simon the Cananaean, and Judas Iscariot, the one who betrayed him.

5 These twelve Jesus sent out with the following instructions: “Go nowhere among the Gentiles, and enter no town of the Samaritans, 6 but go rather to the lost sheep of the house of Israel. 7 As you go, proclaim the good news, ‘The kingdom of heaven has come near.’ 8 Cure the sick, raise the dead, cleanse the lepers, cast out demons. You received without payment; give without payment.

Let me highlight verse 36 in our gospel reading:

"When he saw the crowds, he had compassion for them, because they were harassed and helpless, like sheep without a shepherd."

The Christian tradition makes a remarkable claim – this man named Jesus embodies everything God is. If you want to know who God is, how God is, why God is, where God is, look at Jesus.

God sees us vulnerable people in need of wholeness

God has compassion for us, for our weakness and our needs.

God understands we’ve been condemned, cast-aside and kept down.

God knows that we all need shephardly guidance in our despair.

God is that good shepherd waiting to guide us.

Finally, the biblical paradigm God choosing the least among us is evident in Jesus’ choosing of his disciples. Talk about a ragtag band of brothers. One scholar deemed them a ragtag band of misfits. And that is exactly the way the Bible portrays them. In Peter alone we see this. He’s not a scholar, not a teacher, not a merchant even, but a mere fisherman, we see an example of the biblical paradigm. Peter is all human, blundering, bumbling, bloviating, blustery, a deeply imperfect man. At the climax of the gospel story, what does Peter do? He denies his own teacher to save his hide. Still, God chooses Poor Peter to be the One to be the Rock upon which the church is built. Extraordinary!

And God chooses, comes to, rests with, lifts up the most vulnerable today. He calls us to do the same. It is the paradigm we’re called to follow. Let us follow.