Thumbing through the library’s card catalog (yes, card catalog!), I came upon a new card with a new book that looked very intriguing – Testament of Hope: The Essential Speeches of Dr. Martin Luther King. Coincidentally, I was in the throes of a self-study of the Civil Rights Movement at the time, and this was surely an essential new addition to that study. 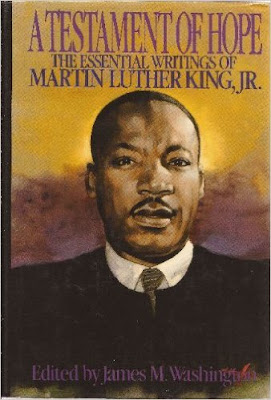 In a more lasting way, it is this book that in many ways is responsible for my marriage and that marriage's child. Let me tell you the story now that is now part of family lore.
I excitedly went to locate that book that day. But the book wasn’t in the new arrivals section as it should have been. I wrote down the call number, went downstairs to the stacks, and where the book was supposed to be there was just empty space. I went to the checkout desk and asked about it. They informed me it had just been checked out, but that I could place a reserve on the book so that no renewals could be placed on it after the short borrowing time for new books. I did just that.
A couple weeks later I got a notice via inter-campus mail (no email yet either) that the book was ready to be picked up. I went straight to the library and checked the book.
I carried that book everywhere. I read it as often as I could. In chapel. In classes big enough to hide it. At meals. It became my Bible for those days I first had it.
A couple days after, I brought it into a student organizational meeting. I was early and so I began reading the book. I planned on doing so until others began arriving.

The first to arrive was the chairperson of the organization called Social for Social Justice. She was a petite young woman with dark brown hair and almond shaped eyes. She easily distracted me. I placed the large book on my desk as she sat down. Immediately, she frowned.
“So you’re the one!” she spouted
Surprised by her remark, I answered with a one-word question, “what?”
Continuing in her faux-frustration, she responded, “I was enjoying that book just a week ago, but wasn’t able to finish it. I was kind of disappointed with the unknown person who took it away from me. That unknown person is now known! I am glad someone is enjoying it.”
Of course, I offered to let her finish it. But she was herself - gracious and patient enough to wait. She then introduced herself – Holly Glenzer.

This introduction began our love story, one that resulted in our son and one that continues to this day. We still share our own copy of the book. It sits prominent on our bookshelf as a reminder of not just the greatness of a man and of the movement he led but as a testament of our own shared hope as well.